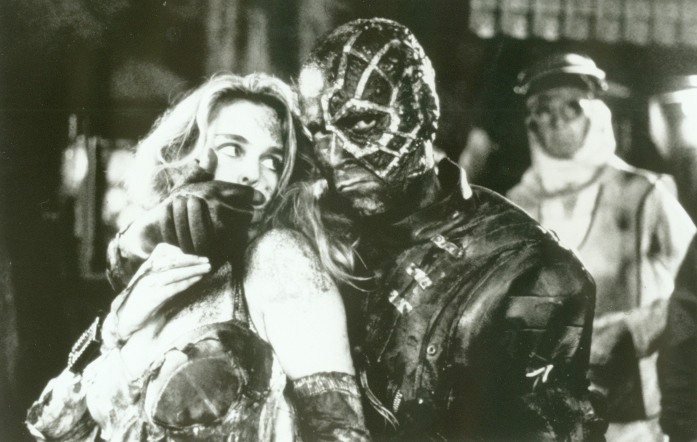 David Colley
Chair - British Council of Disabled People
My favourite disability film is Accion Mutante because it is the most outrageous - it pushes the boundaries - it does not just reproduce stereotypes of disability. It turns on its head the notion of disabled characters as villains and revels in it.

Disabled people have been represented in the media, as in society at large, in a wide range of ways that have changed over time (at least superficially). Martin F Norden argues that disabled people have gone through well-defined periods in which their representation reflects society’s view of disabled people. Hence we see a shift from the 'freak' imagery of the era before World War II, to the image of the 'noble  warrior'  and  post-War  images  of  rehabilitation before moving into the more mainstream imagery of the post-Vietnam War era. If we consider Colin Barnes' list of stereotypes we can see that the disabled and ill are often trapped within a limiting range of character types:  the disabled person as pitiable and pathetic; as an object

of violence; as sinister and evil; as a curiosity; as 'super cripple '; as an object of ridicule; as their own worst enemy; as a burden; as sexually abnormal; as incapable of participating fully in community life.

Nonetheless, it is worth noting that the range of types for disabled characters on film is broader than that on offer for most other socially marginalised  groups such  as  women, those . from ethnic minorities and gays or lesbians.

The only constant is the prevalence of disability imagery, which is as widespread now as it has ever been. Regard less of trends, whenever you look at disability imagery  in any form of film you will encounter the full range of types outlined by Barnes. Disability imagery may be slightly more sanitised today but beneath the surface, beneath the image, most of the old assumptions still dominate film culture.

Although we may get less out right 'freak show' imagery today, there is no shortage of TV documentaries about the problems of conjoined twins. Alternatively, the subject is historicized: the old images are repeatedly shown but for th e hypocritical purpose of ostens ibly criticising past voyeurism.

The current trend is for disabled people to demand (and secure) ' positive images' of disability. But this is potentially both a creative dead -end and a very dangerous route for disabled people. In the main, 'positive' tends to mean pseudo-normal representations, i.e. a reinforcement of the very illusion that oppresses those who are 'abnormal'. Such 'positive' representations do not deal with disability; rather they continue to marginalise it for the sake of a sanitised

view of disability. In addition, ' positive' images are as unrealistic as 'negative' ones: disabled people may be poor, uneducated or unemployed. This is not because of their impairments but because of how society treats them: segregation, special schools, charity, institutionalisation. What we should all be arguing for is a broad range of images with more control given  to disabled  people to create images of themselves both for them and us (whoever 'we' may be).

Herbert Marshall, a Londoner who was a pre-war stage star, lost a leg in World War I but  went  on  to  establish  a long and successful career in  Hollywood.  His  wooden replacement limb  was  known  to  trouble  him  considerably in later life. Marshall was one of  the  biggest stars of  his day as a romantic lead and, later, as a character  actor. His traditional good  looks,  impeccable  British  accent  and urbane manner made him an  ideal leading  man  and  he played opposite such stars as Marlene Dietrich in Blonde Venus (1932), Greta Garbo in The Painted Veil (1934), Bette Davis in The Letter (1940) and The Little Foxes (1941), both directed by William Wyler. He also made two films for Hitchcock: Murder (1930) and Foreign Correspondent (1940). Towards th e end of his career he starred in the original version of The Fly (195 8) opposite Vincent Price.

Marshall was adept at comedy, as in Ernst Lubitsch's brilliant Trouble in Paradise (193 2), and played a blind pianist in The Enchanted Cottage (1945),  but  never played an amputee. The son of actors Percy F Marshall and Ethel May Turner, he was married five times, to the actresses Edna Best (1928-1940) and Boots Mallory and three other women. In a review Graham Greene argued that his screen persona represented an exportable British national characteristic, like tweed or tobacco. Represented in this Catalogue are Blonde Venus (1932), A Woman Rebels (1936), The Enchanted Cottage (1945) and The Secret Garden (1949).

Amputee Marshall plays the ailing husband whose wife, Dietrich, in order to pay his medical bills, be comes a night club sin ger. She falls in love with debonair playboy Cary Grant and delivers her legendary rendition of 'Hot Voodoo', dressed in a gorilla suit.

A scientist invents a method of transmitting and reassembling atoms. He  transmits  himself and does not notice a fly in the compartment.

In this adaptation of Frances Hodgson Burnett 's classic story O'Brien stars as the orphan who transform s the lives  of her embittered uncle and his bedridden son when she starts tending a garden in the ground s of their country mansion. The sobriety of black and white gives way to a blast of Technicolor.

A Victorian rebel against convention brings up her illegitimate child as her sister's orphan and, after many years as a campaigner for women's rights, finally marrie s the patient, understanding diplomat whom she had rejected as a young woman.

Short films - by or about disabled people?

The 'cripple', the 'retard' and the 'loony' - bad language and the 'idiot comedy' genre

The blind, The Deaf and The Wheelchair-user

The Politics of Disability

Where Are The 'real' Disabled?